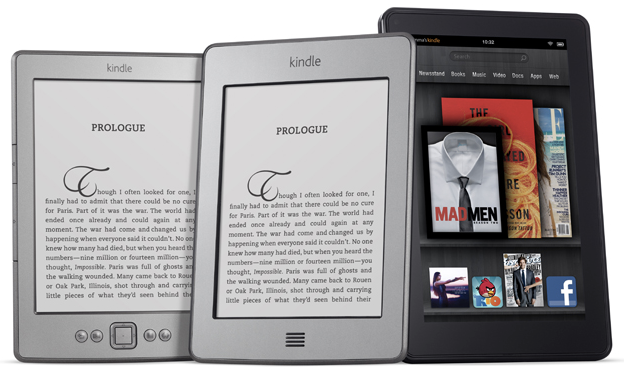 This morning, Amazon announced the Android-based, color, Kindle Fire for $199, and two e-ink, black and white readers for $79 and $99 respectively, the "Kindle" and "Kindle Touch". Most of the press so far has been focused on the Kindle Fire and it's potential as an iPad competitor. That seems a little misdirected to me, given that it's coming out at about 40% of the price point of the iPad, but I guess it makes for better headlines.

There's a large percentage of Americans that are not heavy book readers (occasional at best) but are heavy consumers of other media - particularly video and music. I think the Kindle Fire is targeted at them, while Amazon has been smart enough to continue advancing the book-focused Kindle line.

(Will Apple come out with a competing device between now and Christmas? Maybe, but I doubt it. I think they're more interested in improving the iPad's dominance at the $500-$1000 price range than undercutting their own product with a $200-$300 unit. But I could be wrong.)

Not only that, but rather than trying to push for more revenue via features, etc, they're pushing that side towards lower and lower price points, moving it towards utility device that anyone can afford. If you set aside the Fire, and just saw an announcement of two new Kindle devices for under $100, that would be pretty big news on its own. At $80, the Kindle is now the price of 3-4 hardcover books for a fantastic device (based on my experience with earlier versions) that offers immense portability, easy reading and great battery life.
All of this is another huge step forward for ebooks and a really bad sign for print books, especially text-heavy, black and white ones. There's going to be millions of these low-cost readers being given as gifts this Christmas. At less than $100, it's now gone from being something you'd really see only bought for signficant others to a more general gift you might give that Aunt, Uncle, friend or in-law who loves books.

I pre-ordered a Kindle Fire this morning (they're expected to ship mid-November) - I'm already both a heavy Kindle user, and a heavy Amazon Video On Demand user. Plus, as an Amazon Prime subscriber I have free access to thousands of videos. It seems like a great device to have in my bag for my commute to work, or waiting on my next flight, and I'm looking forward to testing it out.

The comments to this entry are closed.